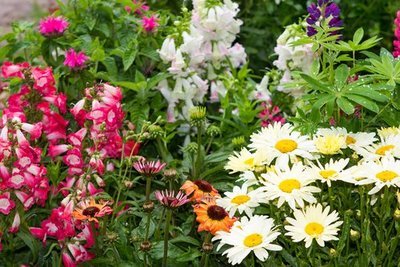 At Mere Park Garden Centre in Newport you'll find the best perennials in Shropshire. Perennials bring a garden to life with movement, colour and scent: an ever-changing tapestry of beauty which marks the passing of the seasons and gives you something new to look at each time you go outside.

Technically a perennial is simply a plant which comes back every year. They don't have woody stems, like a shrub or tree: herbaceous perennials die right down, while evergreens like hellebores and bergenias keep a clump of leaves right through winter. Because they're seasonal you can really ring the changes if you choose carefully, giving your garden colour and interest all year round with perenials from Mere Park Garden Centre.

Perennials are the mainstay of the plant benches at Mere Park Garden Centre here in Newport and they search far and wide for top performers, including the best of the on-trend designer plants and old traditional favourites.

Long-flowering perennials never go out of fashion and offer fantastic value, often flowering their socks off for months on end. Every gardener's wish list should include desirable plants like ´Salvia 'Caradonna', with its summer-long cobalt-blue flower spikes, perennial wallflower Erysimum 'Bowles' Mauve', perfect for cottage gardens, or dainty Geranium 'Rozanne', recently voted RHS Plant of the Centenary and always in flower from June to October.

Buy perennials for every season at Mere Park Garden Centre

Start your perennial display with spring beauties like pulmonarias, primulas, dainty-flowered Epimedium (great for shady corners) and the sweetly nodding flowers of aquilegias.

In summer you're spoilt for choice: highllights include sumptuous peony blooms and pretty heart-shaped dicentra flowers in early summer, a riot of hardy geraniums, dancing gaura and daisy-like echinaceas through midsummer, and late summer beauties like rich yellow rudbeckias, Japanese anemones and long-flowering asters to take you into autumn.

And it doesn't stop there: even in winter there are perennial beauties like the broad, deep purple leaves of Bergenia (topped with lipstick-pink flowers in spring) and demurely nodding hellebore flowers.

All the perennials you'll find at Mere Park Garden Centre in Newport are grown with care to reach a good, robust size before sale so they'll slot straight into your garden and start growing right away.

The knowledgeable staff can advise you on the right combination of perennials for you, whether you're extending up your year-round interest, redesigning a border or hunting for the right plant for a tricky spot. Whatever your gardening conundrum, perennials have the answer – so come on down to Mere Park Garden Centre for the best perennials!